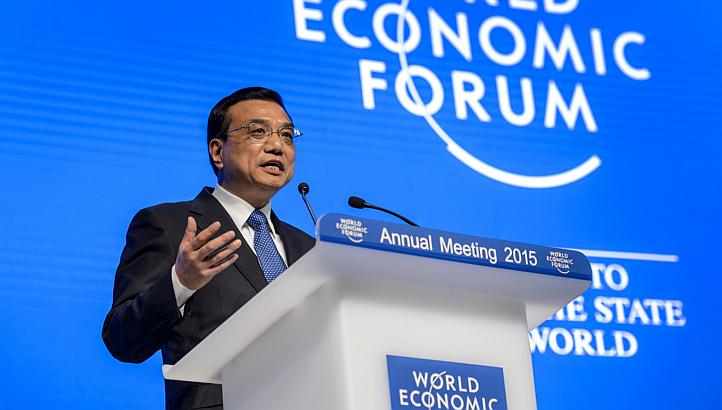 A New stage of economy, more sophisticated division of labor and a more optimised structure is the New Normal in China’s Economy according to Premier Li Keqiang, for which he compared the Chinese Economy as a running train, which will not speed or momentum on the contrary will be powered by a stronger dynamo and around with greater steadiness and bring within new growth and new opportunities.

China’s economy will not suffer a hard landing even as it braces itself for a further slowdown this year, Li Keqiang, Premier of the People’s Republic of China, told more than 2,500 participants at the 45th World Economic Forum Annual Meeting in Davos-Klosters, Switzerland.

He added that the government will press on with structural reforms, which include liberalizing its services sectors, promoting mass entrepreneurship and innovation, protecting intellectual property rights and deepening its capital markets. “We will move towards the path of reforms. This way we can shift gear without losing momentum and achieve medium- to high-speed growth, and medium- to high-level developments.”

Using the analogy of a skier at Davos, he promised that China will “go at the right speed, keep balance and be courageous”.

Premier Li’s address came a day after the country announced its slowest growth rate in 24 years, with full-year GDP at 7.4% in 2014. The government has prepared the nation to embrace the “new normal” as it focuses on quality rather than speed of growth, and shifts its focus from an export-investment led model to one that is more reliant on consumption and the services sector.

In his address, Li also suggested that China would eschew stimulus measures through monetary easing but instead step up investments in targeted areas, including health, clean energy and transport, as well as provide support to the country’s small and medium enterprises, create employment for young people and optimize income distribution.

The Premier said China’s economic slowdown reflects the profound adjustments in the global economy and is consistent with its larger economic base. A growth at 7%, he pointed out, produces annual increase of $800 billion at current prices, larger than a 10% growth five years ago.

Here the Full speech of Premier Li Keqiang at Davos